Jaca is vivacious joining together modernity, tradition, history, wonderful landscapes, and unique cultural heritage. Being so close to Astún and Candanchú Winter resorts make it the snow capital and its streets are vivacious in any season of the year.

Jaca has located 140km from Zaragoza, the most vivacious town in the Pyrenees hosts an important heritage, in which the Romanesque cathedral outstands. It was one of the first Romanesque cathedrals built in the Iberian Peninsula, at the end of 11th century. It was born linked to the new Kingdom of Aragón and Santiago’s Road, becoming a reference temple for both. Its influence can be spotted in the Trinity crimson reproduced in the main portico, or the famous Jaca ‘ribbon-like sculpture’. An extraordinary Diocesan Museum exhibits one of the best medieval painting collections in the world.

Jaca’s old town offers many other interesting buildings, like the fortress ‘Ciudadela’, whose origins date back to 16th century and where Military Miniatures Museum is hosted. The Renaissance City Hall and churches as ‘Santiago’, ‘Carmen’ and ‘El Salvador’ and ‘San Ginés’, holding Lady Sancha’s sarcophagus, a real jewel in Romanesque sculpture.

It may be winter or summer, spring or fall, Jaca is a town full of life, with streets providing shops in a row, pubs and restaurants. This is due, mostly, to nearby ski resorts like Astún and Candanchú, in addition to an exceptional natural environment and the rich monumental heritage.

Jaca is a town where celebrations are held on the streets, particularly the First Friday in May festivity and the Pyrenees Folklore Festival, both having been declared of Touristic National Interest. 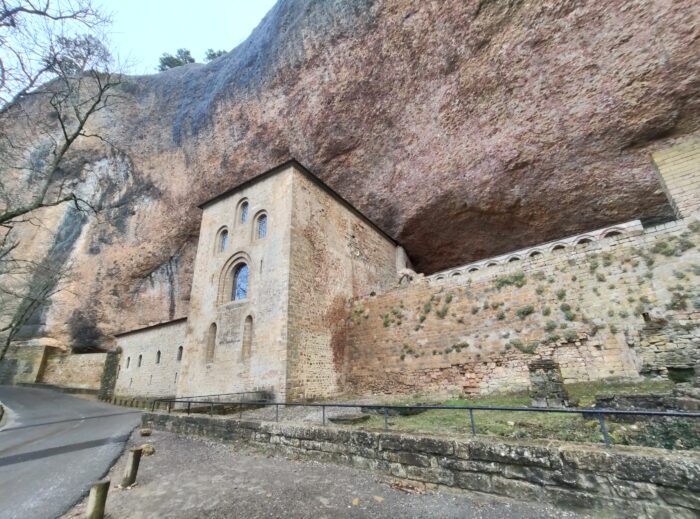 It hosts remains from an ancient Mozarab church, over which it was later built a Romanesque one and the cloister, mostly sculpted by the master from Agüero.

During the Middle Age its isolation provided it with legendary traits putting it into relation with the Holy Grail.

It was royal pantheon until the 12th century. Declared of Cultural Interest, the monastery is formed by different parts belonging to different ages. Across the atrium the Council Chamber is reached, as well as the low Church, Mozarab from the 10th century. The aristocrats’ pantheon holds two rows of niches decorated with attached half-point arcs and Jaca-style frieze with stone ribbons.

From there the high church is accessible (11th century) and the cloister (12th), a wonderful example of Romanesque Art with a priceless gallery with sculpted capitals representing scenes from the bible.

Really close to the Old Monastery a new Baroque one was built, known as New Monastery, surrounded by a particularly beautiful scenery declared Protected Landscape.

The gastronomy of Aragon corresponds to the culinary customs existing in Aragon. It is a cuisine influenced by its northern and eastern Mediterranean neighbors. Aragonese gastronomy also benefits from the abundant market gardens of the Ebro basin, which is why its excellent fruit and vegetables are present in many of its dishes.

One of the famous Aragon dishes: