Open to the public for two years, the Casa de les Punxes is the first house designed by architect Josep Puig I Cadafalch. Famous Catalan modernist architect, also known for Casa Amatller and Casa Macaya. Today we enter the Casa Terradas, this is its original name, to discover the history of one of the most emblematic buildings in Barcelona.

ABOUT THE TERRADAS FAMILY

With the death of Bartomeu Terradas, the sons Rosa, Bartomeu, Josefa and Angela receive a small fortune which will be necessary to the construction of a building for the three sisters. The building works were managed by the brother who decides to leave the project to Josep Puig I Cadafalch, as a friend of the architect. In 1905 the building ends, the first floor occupied by the three sisters and the rest for rent.

For football lovers, Bartomeu Terradas was football player and president of the Barça club.

Declared a historical monument of National Interest in 1976, Casa de les Punxes is now privately owned, with space for different offices. Nowadays there are people living there too (i cannot imagine how expensive it can be living here).

So why the house was finally called Casa de les Punxes? The name comes from the six towers which composed the house Punxes (in English Punxes, mean peak).

INSIDE THE CASA DE LES PUNXES

The visit can be done by audioguide or by booking a guided tour. I tried both, in my opinion, I recommend a guided tour, a guide like Andreu isn’t easy to found everywhere.

The visit with an audio guide is an animated tour that begins with the legend of San Jordi and the dragon. The tour starts from the first floor up to end on the terrace of the house. You will not find the original furniture or floors used by the Terradas family, but, the decoration of the ceilings and the 3 entrances (elevators included) are very beautiful.

The exterior of the house, for the size and position it is difficult not to notice it, in my opinion, is the best part of the house. On the four sides of the house, there are many references to modernism and to the Terradas sisters.

The main facade (coming from Passeig de Gracia) depicts the mosaic of an angel, recalling one of the sisters. The left side, recall the legend of San Jordi and right side a clock and finally the last a rose garden, in reference to the other sister, Rosa. The exterior walls are made by local stone from Montjuic mountain.

The division of the house is easy to recognize thanks to the 3 porters. One of the things I liked most about the facade is the floral decorations of the windows, starting from a pot with roots, then flowered, then with fruits and finally with old leaves. 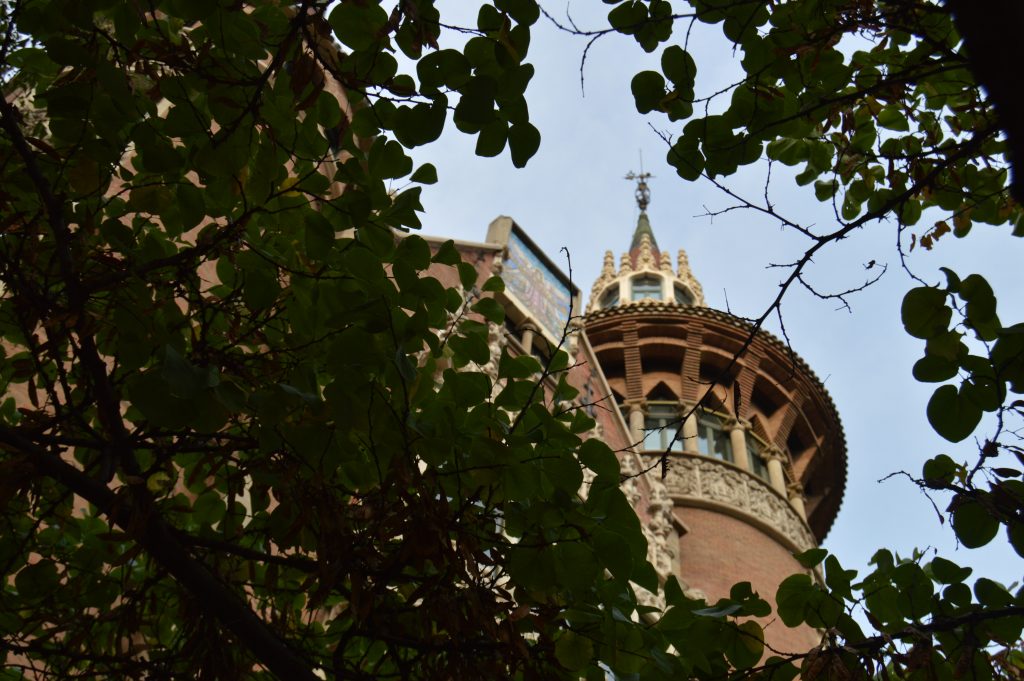 If you want to visit the house from 7 pm, you can do it during the Nits amb ritme. Every Friday on his rooftop there is a concert (Bossanova and Jazz music), from June to August. This year Nits amb Ritme edition includes the visit to the exhibition (from 07:00 p.m. to 08:00 p.m.) Check the last dates in August!!

I hope you enjoyed it as much as I do if you want to continue with the “Ruta del Modernisme” you can visit Casa Vicens, Antoni Guadí’s first house.