I’m a huge fan of graffiti and murals, and this year I was lucky enough to see the 5 most beautiful murals of San Francisco. I want to share this list with all the street art lovers, I think murals make a city more beautiful, obviously respecting the spaces and laws. Many of the graffiti I added to the list are linked to non-profit associations. Others are just dedications to famous people that the citizens of San Francisco love.

THE 5 MOST BEAUTIFUL MURALES OF SAN FRANCISCO

Painted by seven women artists, this building is amazing. I think is the biggest mural I’ve seen in my life and really inspiring one. With their helpers and volunteers in 1994, the mural titled MaestraPeace covers both the outside of The Women’s Building as well as the interior entrance hall. It features images of feminine icons from history and fiction and the names of more than 600 women written in calligraphy.

Since 1971, TWB has helped more than 25,000 women and their families are welcomed to The Women’s Building each year. Check the webpage and their projects.

It’s of epic proportions, in black and white and done with dedication. More than 16 feet wide, the mural mirrors the central figure of Carlos Santana. The Mission District icon from Jalisco, Mexico, who pioneered “Latin rock” in the United States in the late ‘60s. The mural is the work of Mel Waters, a San Francisco muralist and tattoo artist who grew up near Guerrero and 17th streets.

The image does not show Santana’s guitar nor does it make any reference to music. Only the grand scale, the central figure of Santana is shown, clutching at his mouth with a thoughtful expression that is part admiration and part amazement.

In Chinatown it is easy to find beautiful graffiti, just walk on the main road and you will notice how many murals there are in this neighborhood. But my favorite is that of Bruce Lee.

San Francisco is where Bruce Lee was born back in 1940 during his father opera touring in America.  His father was a famous Cantonese opera singer and film actor. The family then moved back to Hong Kong a year later due to the Japanese invasion.  When Bruce Lee was 18 years old, he returned to California and make a debut in Hollywood in his 20s.

Clarion Alley is a small street between Mission and Valencia Streets and 17th and 18th Streets, notable for the murals painted by the Clarion Alley Mural Project.

The CAMP is an artists’ collective formed in October 1992 by a volunteer collective of six residents of the North Mission District. The mission of CAMP is to support and produce socially engaged and aesthetically diverse public art as a grassroots community-based, artist-run organization in San Francisco. In June 2016 CAMP launched its first website, which includes an archive of its murals. You can find them by artist, location or year.

In celebration of Harvey Milk Day 2018, a new mural by Paraguayan artist Oz Montania was dedicated. This colorful mural of Milk with a rainbow behind him and holding a megaphone with the words “Hope Will Never Be Silent”.

The mural is on the wall of The Cafe at 17th and Castro. Right above Subway and next to the Chevron Station. Castro district is not famous for his graffiti but takes a look at the crosswalk around the neighborhood. 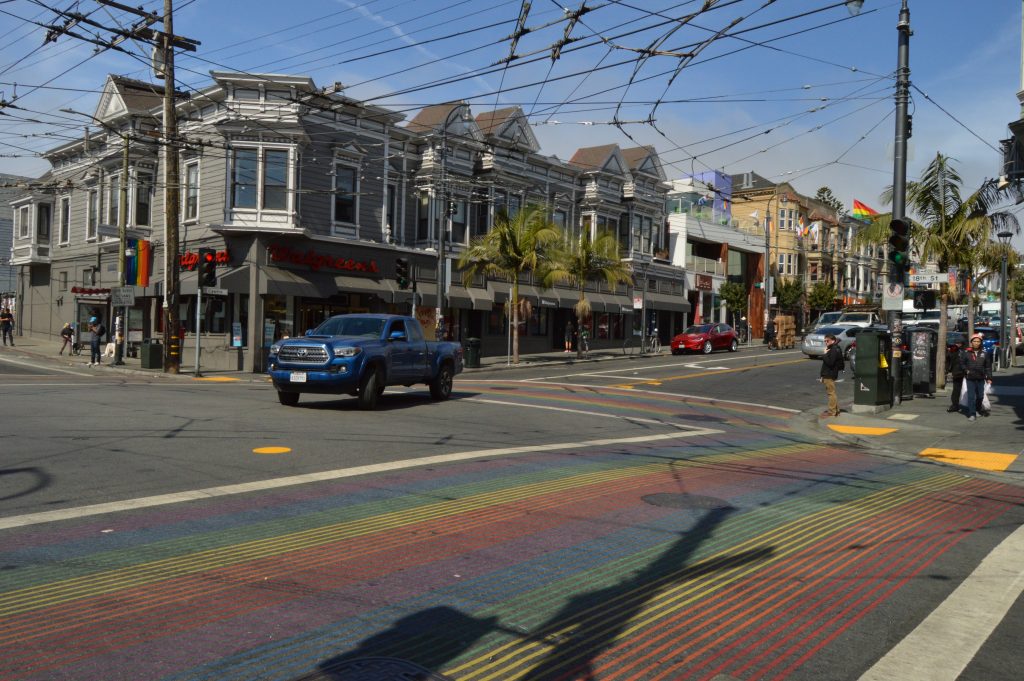 For more post about my Californian trip, link here.

It's seems like the Alhambra right? But is not...t

One of the most beautiful places in Bavaria is loc

New post! 5 days in South Germany. For this trip I