San Pellegrino is also called “the pearl of the Brembana Valley”, and it is not hard to believe it. The art nouveau palaces, the historic spa with the thermal baths, and the world-renowned water, and beverage plant.

Today you can go back in time and live the same splendor of the early twentieth century, enjoying the new thermal center recently restored and implemented according to a design that also includes the restoration works of the luxurious Casino. The city is located less than an hour from Bergamo, another beautiful city too, it had the chance to visit it.

San Pellegrino flourished between the 19th century and the early 20th century, fully embracing the characteristics of the Belle Époque, namely a diffused optimism and a new desire for fun and carefree.

For almost twenty years, San Pellegrino became the heart of Bergamo’s social life, and not only, thanks to the presence of the Spa, the Casino and the Grand Hotel, elegant meeting points for the rich industrial middle class in search of entertainment. The infrastructures also took advantage of these positive conditions: in addition to the railroad connecting the town to Bergamo, in 1909 a funicular railway was built to overcome the 300 meters difference in altitude separating the town from the village of Vetta.

The First World War led to a first decrease in the number of tourists, which continued after the Second World War, when the Grand Hotel had to close. However, the water industry did not suffer any crisis and San Pellegrino continues to invest in it through bottling, creating a brand exported and renowned in every part of the world.

The Spa, built in 1840, made this small village in the valley a famous tourist center for the wealthy international bourgeoisie. The thermal baths were enlarged at the end of the 19th century, with buildings in the “Liberty” or Art Nouveau style, the artistic movement characterized by curved lines and arabesques. In a few years, this movement conquered San Pellegrino, filling it with some of the best examples of Art Nouveau style in the world, such as the majestic Municipal Casino, the Grand Hotel and the water bottling factory.

Most of these works can also be visited today; some of them have been recently restored and reopened to the public. The Spa, for example, is part of an elegant spa combining “Liberty” architecture with a refined modern style. 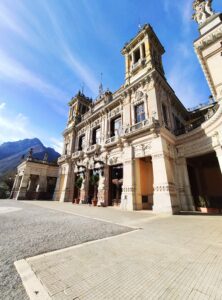 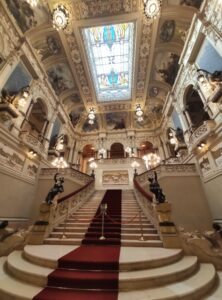 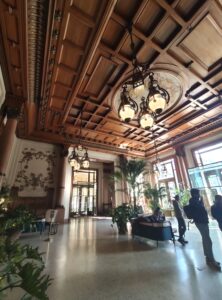 Pellegrino has earned its reputation for its lively, lingering bubbles that tickle the palate, its slightly salty taste and balanced acidity that refresh and quench thirst. It is the perfect drink to pair with a savory meal, balance with a full-bodied wine or try on its own.