The city of deer, considered messengers of God, today we visit the city of Nara. This city is very close to Osaka and is the furthest most visited city in Japan. Not only thanks to the deer that occupy the park and surroundings, even for the Tōdai-ji Temple which we will later visit. Nara Park was established in 1880 it is one of the oldest parks in Japan. Like many of us, we decided to visit this city during the day, without stopping at night. Are you ready to meet these adorable deer? Check my 15 days itinerary in Japan to know everything about my Japanese trip.

HOW TO GET TO NARA

The nearest airport to the city of Nara is 45km away and is Osaka International Airport. Easily accessible by the Itami-Airport Limousine direct bus, journey time 1h and costs 1500 yen one way.

From Osaka, there are direct trains every 20min from Namba station (duration 45min), right in the city center. While from Shin-Osaka you will have to make 1 change. 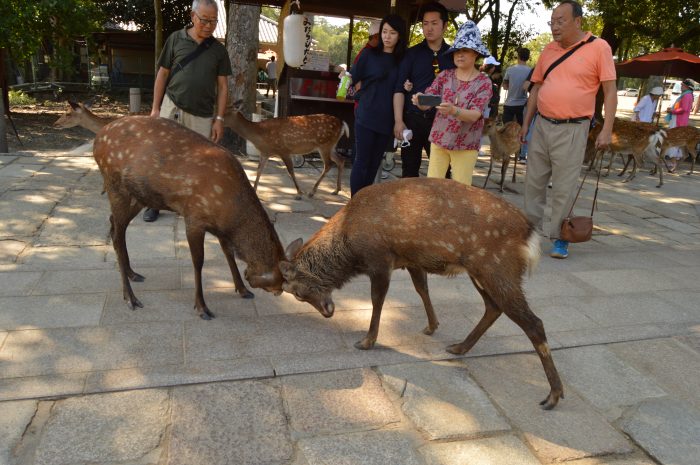 The main attraction of Nara, are the famous deers that live in and around the park. Do not be fooled these deer are wild and are not as adorable as they seem. Some tips for more sustainable tourism:

Killing one of these deer is a capital offense punishable by death up to 1637, the last recorded date of a breach of that law. After World War II, the deer were officially stripped of their sacred status, and were instead designated as national treasures and are protected as such.

Now that we have deer we talk about what we can visit in Nara. Although it is not a very large city, it is perfect for a day. The park of Nara is a public park located in the city of Nara, Japan, at the foot of Mount Wakakusa.

In the park, we can find the Tōdai-Ji Temple the Greatest Bronze Hall of the Buddha, UNESCO World Heritage Site. The entrance costs 600 yen, and it’s open from 7.30 to 17.30.

It is one of the “Historic Monuments of Ancient Nara”, together with seven other sites including temples, shrines, and places in the city of Nara. The other 6 temples are Daian-Ji, Gangō-Ji, Hōryū-Ji, Kōfuku-Ji, Saidai-Ji, and Yakushi-Ji.

DAY 3 the last day of our german trip is Tubinga..

DAY 3 we stopped in Schiltach an other beautiful v

DAY 1 We start our German trip in Rothenburg on de

Today we have arrived in Bern... this is one of th